XKCD posted about Bun Alert, I thought it'd be a quick build, and it was.

What Does It Do?

Users subscribe their phone number to the Bun Alert system, and receive new SMS alerts when a Bun is spotted. In other words, it functions exactly as described in the original webcomic: 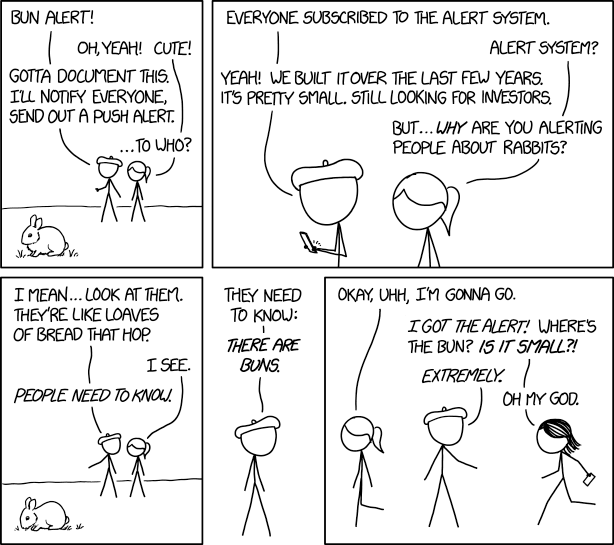 I plan on also having alerts include an image link to a photo of the spotted Bun, since not everyone subscribed will actually be nearby whenever a Bun is found. But one can hope.

Can I Use This? Can I Build My Own? Also, yes, you can build your own using the Github repo here! https://github.com/jgreenemi/BunAlert

How Is This Built?

Diagram made with draw.io.

While this did involve a little more effort than I'd originally anticipated, building Bun Alert remained an afternoon-length project as almost everything is done quite simply via multiple services in AWS. The diagram above gives an overview of what services are involved.

In addition to the above architecture description, there is an IAM policy on the SNS topic for Bun Alert to allow the Lambda function to manage subscribers and to publish new messages to the topic, otherwise the Lambda function would fail. There is also an ACM certificate on the API Gateway's custom domain name - you can't set up a friendly URL for your API without a certificate.

If this sounds like a lot, it can seem like it. Luckily, the project was sped up greatly by using zappa for the creation of the necessary AWS dependencies, and for automating the actual deployment process. I make my code changes and then zappa update and it's live a minute or two later.

To dive into the actual build, take a look over the Github repo here.

It's Bun Alert - does what it says on the tin. Give it a try if you haven't already!

You notice how it takes me weeks on weeks to get new posts up? That's intentional, as you'll only see posts when I have something substantive to contribute, and I only take the

Update 2017/07/20: Code's on Github under jgreenemi/DescribePublicBuckets! This script is now available in both Python and Bash to give you some flexibility. Problem There's been a recent wave of accidental